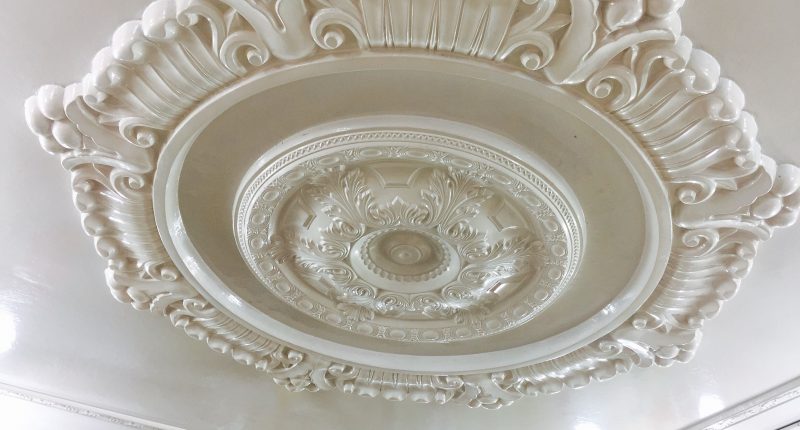 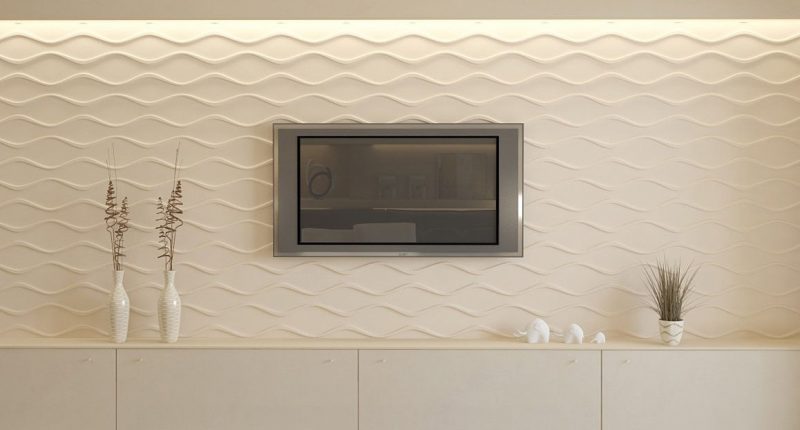 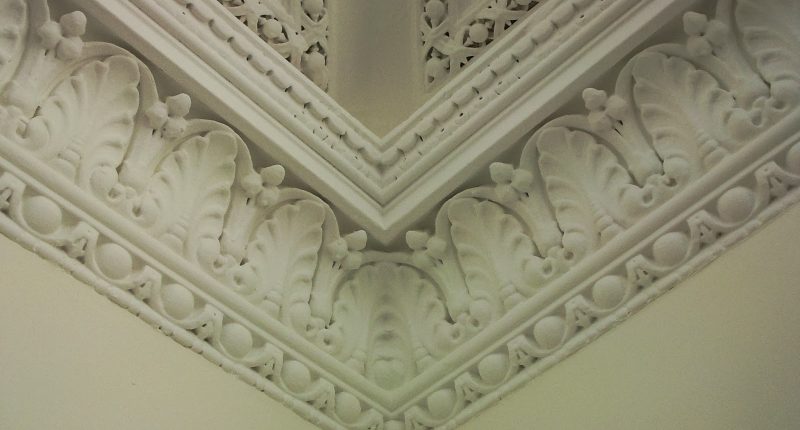 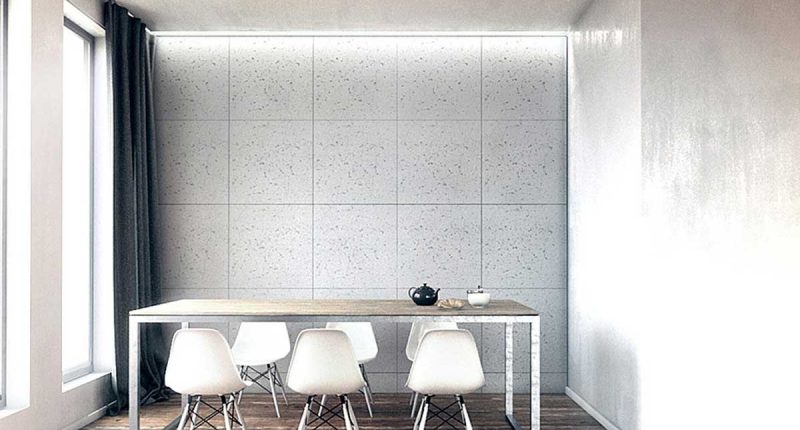 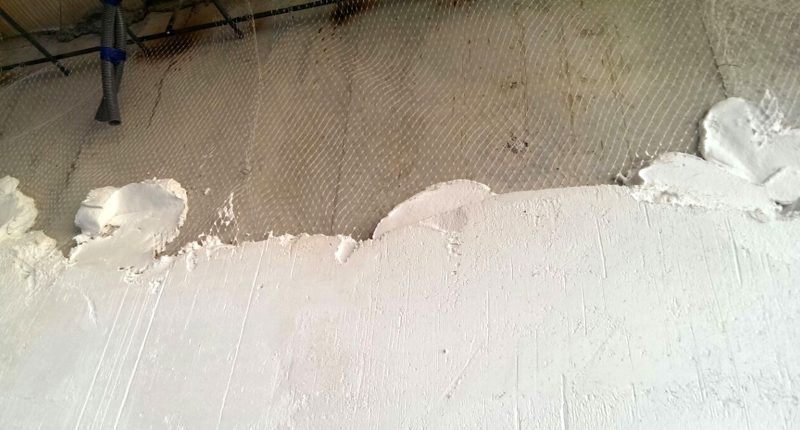 Gypsum plaster is what the average person on the street thinks of when plastering is mentioned. This generally connotes an image of an old house with full thickness hardened plaster oozing out between wooden laths. While the practice of plastering over wooden lath expired in the early part of the last century, this historic visage is usually met with a question: “Do they still do that anymore?” While the answer is far from yes in terms of its modern use in residential construction, it is more emphatic in commercial and institutional work where full thickness gypsum plaster is valued for its strength, sound attenuation and fire resistance.

A wall plastered with conventional gypsum plaster is non-combustible. When combined with gypsum plaster bases, gypsum plaster can provide assemblies that can achieve fire ratings of up to two hours for partitions, ceilings and column fireproofing.

Gypsum plaster is essentially reconstituted rock and exceptionally hard. When combined with gypsum plaster board, it also adds lateral stability to the assembly.

The finished plaster wall is denser than a typical wall finished with drywall. As a result it has a greater resistance to the passage of sound. Combining gypsum plaster with gypsum plaster board base can be especially beneficial in apartments, townhouses and condominiums that share common or party walls.

A conventional gypsum plaster wall provides superior abrasion and wear resistance to that of gypsum veneer or drywall. This is especially important in high traffic environments such as hospital or dormitory corridors or anywhere where pedestrian contact can be an issue.

Because of its monolithic nature, conventional gypsum plaster provides added value in keeping out cold winter drafts. This affords the occupants a warmer more comfortable home.

A wall covered with conventional gypsum plaster is one of the easiest to decorate. Wallpaper is easier to install and much easier to remove when it comes to redecorating.

All of these features and benefits add up for extra property value when it comes time for a building owner to sell.

Lime based plaster in fact was quite similar to stucco compositions until the turn of the 18th to 19th century. Up until that time lime plasters consisted of basically slaked lime, water, sand and animal hair. Lime plaster unlike gypsum plaster does not go through a chemical reaction to harden. Instead, it goes through a process called “carbonation,” which results in the plaster absorbing carbon dioxide from the surrounding environment. The unfortunate result of this process is that it took an anguishing long time for the plaster to harden completely. Typically it took up to four weeks to pass for the initial “scratch coat” or first coat to take up enough before the brown coat (second coat) could be applied. Similarly, several weeks would go by before the final finish plaster could be applied. In some situations it was not unusual for a homeowner to wait several months or even an entire year for the plaster to harden fully before final finish decoration of painting or wall papering could even begin. This oftentimes prevented or delayed the buyer from taking ownership or occupying the house before the plaster had completely dried out. Over the years improvements to this process involved adding materials like highly calcined (burned) gypsum or portland cement to accelerate the hardening.

Gypsum based plaster entered the picture in the early 1900’s primarily because new manufacturing processes made it more readily available in the United States. This provided a sea change to plastering processes because it was soon realized that gypsum plaster set faster and resulted in a harder finish. This of course alleviated some of the concern for long construction delays, because depending on conditions the plaster was completely dried out and ready for finish decoration in as little as two to three weeks.

In historic renovation, it is oftentimes difficult to determine whether the product used was lime based plaster or gypsum based. The simplest method of determination may be in taking a small sample and inserting it into a dilute solution of muriatic acid. If gypsum is the principle ingredient a white residue will result along with the remains of whatever sand was present as the sample dissolves in the solution. A more effective albeit more costly determination may be a petrographic analysis, which can more accurately identify the component parts of the plaster.

Gypsum has been used for thousands of years: The first examples of its use as a plaster appeared in what is now Syria over 9,000 years ago. Its use is also well documented in the pyramids of the ancient Egyptians who plastered over woven straw lath and decorated with murals composed of tinted plaster.

In 1768, a 24 year old French scientist named Antoine-Laurent Lavosier was credited with discovering that the mineral gypsum has water as part of its composition. In his experiments Lavoisier realized that the water could be driven out of the gypsum by heating it. The remaining sediment could then be pulverized and reconstituted by adding back in the water. Around the same time of Lavoisier’s experiments, large deposits of gypsum were discovered around Paris. “Plaster of Paris” was born and flourished as a new building material in Europe. Not only could it be shaped and molded, gypsum plaster was soon recognized for its prowess in suppressing fire. For this reason it wasn’t long before many of the interior walls of Paris buildings were composed of gypsum plaster. In its hard state it is called “hemihydrate,” which essentially means that it has returned to the rock like crystallization it had before it was mined from the earth. What makes it great as a fire protective coating, is that as it consumes heat (calcines), it dissociates from the water molecules that were needed in its installation.

What was also significant in “new world” plastering around the turn of the 18th to 19th century was the development of different substrates for plaster. Metal lath started showing up on plaster applications at approximately the same time that gypsum plaster became more readily available. It was much easier to affix to a framed wall than the tedious installation of individual wood laths and also provided a much better mechanical key for the plaster. A third development that really revolutionized the way interior plaster was installed was the development of gypsum board lath. Commonly referred to by the proprietary USG product name “Rocklath,” this was perhaps the most cost effective method for three coat plaster work, because a lather or carpenter could quickly get an area ready for plaster and it required less base coat plaster than metal lath. According to USG, “The gypsum core of Rocklath is faced with multilayer laminated paper engineered by a USG process to provide proper absorption, check plaster slide and resist lath sag.” Some types of gypsum plaster base often came perforated to provide a mechanical key for the initial plaster application.

Three-Coat Work: Refers to the installation of a scratch coat (1st layer), a brown coat (2nd layer) and finish coat installed for a full thickness of 5/8″ with drying time between each successive coat.

Two-Coat Work: A scratch coat is applied and allowed to take up (stiffen) slightly before the brown coat is applied with the same plaster mix. This constitutes one coat. The second coat would be the application of the finish plaster.

Any application of three-coat, full thickness gypsum plaster to a metal plaster base of expanded metal, woven wire or welded wire that is attached to the structural support of a wall or ceiling. Examples:
Walls: nominal steel studs, wood framing or cold rolled channel with metal lath fastened by a variety of attachment methods.

Any application of two-coat gypsum plaster over a solid substrate of concrete masonry. Masonry must be clean of any residual dirt, efflorescence or any other material that may compromise the bond. All masonry joints should remain unstruck, flush and smooth with the surface of the block. Depending on the condition of the block, it may be advisable to apply a bonding agent or in some cases attach metal lath to ensure the bond of the plaster.

Any application of two-coat gypsum plaster over a solid substrate of reinforced monolithic concrete. Concrete must be free of dirt, laitance, efflorescence and any form release or residual oil that may inhibit the bond. Small imperfections or depressions and voids should be filled with compatible cement mortar and allowed to dry before plaster operations. Depending on the condition of the concrete it may be advisable to abrade by mechanical or chemical means or treat the surface with an appropriate bonding agent prior to the application of plaster. In some cases it may be advisable to attach metal lath to ensure the bond of the plaster.